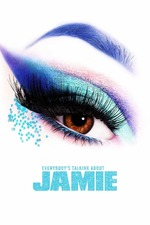 A tonally inconsistent mess, with bad acting, awful writing, and lazy character development. Everybody’s Talking About Jamie is almost cartoonish in how it tackles its subject matter; there is no balance between lighthearted moments and terrible one-liners, and the more difficult topics. The majority of the characters are barely fleshed out; Pritti is just Jamie’s friend and doesn’t seem to have much outside of that other than wanting to be a doctor, and Dean is comically created, the archetype of a homophobic bully that doesn’t come across in anyway threatening or realistic, it’s comedic, and it’s not supposed to be.

It reminds me of The Prom in a lot of ways, but mostly in the sense that the entire story is supposed to make you believe that there is this system of oppression pushing down upon our protagonist, but the lack of a consistent tonal approach, and the sudden turnaround of all the people who were homophobic and bullies by the end of the film, makes everything feel so insignificant.

The dialogue is truly awful, like someone who has never heard a teenager speak decided they knew what teenagers talk like. It feels as though the story was not fleshed out enough, that it’s aimed to make people think “homophobia bad, but I enjoyed this film so I’m a great person who isn’t homophobic”. It’s an awful execution of a story that could have been great, and certainly has great potential and importance, but it’s so lost in trying to be the wrong iteration of itself.

A surface level story that tries to reach moments of depth and darkness but is hindered by its writing and overall lighthearted, unrealistic approach.