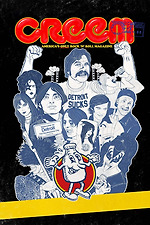 If you're of a certain age and inclination, Creem Magazine was a sort of tribal literary meeting place. My "first date" was in a record store in Minneapolis in 1972, and it was love at first glance. First, they were writing about bands from the Midwest with as much passion and intensity as the big California/NYC/London stars of the day, and more importantly, they didn't take any of it seriously. Not that they weren't passionate about the music and where it all fit in with our lives, but the whole star mystique was completely shredded. Devoted to National Lampoon since high school, Creem seemed like the music centered sister publication. I wanted irreverence in music, so a magazine that mirrored that in writing was a slam dunk for me.
The crew that wrote for Creem were all DIY types that had no major journalistic credentials, but definitely had a perspective that you didn't find in Rolling Stone. Sadly, neither Barry Kramer, the original editor, nor Lester Bangs, the most notorious writer, are still alive to talk about it, but plenty of the writers, including Dave Marsh, and plenty of the musicians who read it or appeared in its pages are on hand. Long before Rolling Stone jumped on the bandwagon, it was Creem, Crawdaddy, Trouser Press, Bomp, Punk, and others that were covering the underground music scenes happening around the US and the UK. For a kid stuck in the dead center of the country, they were a lifeline and so I'm giving it the highest rating because Creem was foundational.