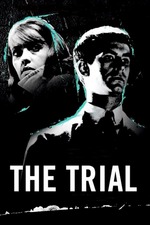 When I am preparing to watch a film for the first time, a lot of different things will fly through my head regarding expectations, both in terms of the quality of the work and also regarding what tone and atmosphere I am anticipating. A majority of the time exactly what I expected is in fact realized on screen or, if their are differences, they are relatively minor in the grand scheme of things. "Oh, this is a bit darker than I expected." or "I had no idea how funny this would be" are common examples of this.

On a whole different level is an experience like Orson Welles 1962 film The Trial. Prior to pressing play, I had pictured in my mind a serious, straightforward drama regarding, well, a trial. A courtroom setting, a jury of their peers, witnesses and testimony and evidence and hearsay, the works. I would have never guessed that I would be diving head first until a world that literally felt like a nightmare, a black and white pool of surrealism that had me literally scratching my head in befuddlement throughout, but without a doubt I was mostly fascinated by the cinematic vision on display.

It is important to note that I said "mostly fascinated" because unfortunately, I started to grow weary of everything I initially embraced about The Trial during the first half or so. The onslaught of surreal started to feel a bit tired, but not enough that I ever actually completely checked out mentally. Still lingering was a fascination with the premise itself, that a man could be arrested for an undisclosed crime and be totally in the dark as to why his life was being flipped upside down. A part of me wanted answers, but really I don't think I ever truly did. The mystery and the confusion felt far more exciting and rewarding than whatever traditional conclusion a narrative like this could come to.

It was a joy to watch Anthony Perkins work with different material, as somehow I had literally only ever seen him in the original Psycho prior to this experience. Despite the many, many films I see, my countless amounts of viewings of Psycho were the only basis I had for his abilities, so it was strange, trying to wrap my head around this very familiar face playing a different character besides Norman Bates.

At one point, The Trial absolutely had me around it's finger and I was melting with delight with every sublime example of how the usage of lighting can create an ominous world of shadows. I absolutely cherish surrealism and the ability to think for myself regarding the themes in play, a chance to think bolder and deeper about cinema than a simple story that moves along from point A to point B and C in a traditional sense.

I only wish The Trial had held me tight and never let go throughout rather than feeling strangely redundant at times in its absurdity. A very good film that fell short of greatness.

Please check out my blog, No Blogging for Old Men