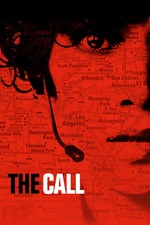 The Call was one of those films that, whether fair or not, one look at the trailer and I declared no thanks, not for me. Usually the that-film-will-be-terrible-o-meter is pretty spot on, with the occasional but rare exception, and I started to think The Call might end up in that category after catching wind of some pretty strong word of mouth from a couple of co-workers.

For the first 60 of the 90ish minute length of this film, I was a believer. While the film was nothing exceptional, nothing that would break through to any top lists or become a work that I could revisit over and over, at the very least the scenes were flying by and I was totally entertained by the experience. Any moment Halle Berry was on the phone with a kidnapped teen, the tension soared and my eyes were glued to the screen.

That third act though, boy howdy. That sure is a pile of shit, isn't it? I can't wrap my mind around how quickly this film fell apart. The decision to completely switch gears from a tense, enthralling chase the kidnapper to save a teenagers life film, to a bewildering and boring slasher flick in which the bad guys motivations are completely explained to us in eye rolling fashion, is beyond question. In fact, it is downright awful.

It's a shame, really, that in what seemed like a matter of moments, this literally went from a film I was going to recommend to my wife to watch when she got the chance to something so laughable and forgettable. I get far more annoyed by missed opportunities like The Call then by flat our bad films that never had a chance. This really could have been something had it been in the hands of someone with more talent who would give it a proper ending.