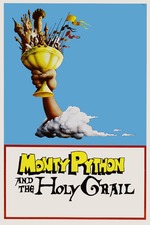 Monty Python and the Holy Grail 1975

Yes, I can practically quote this from its first second to its last. Observe:

“All right sonny, that’s enough. Pack it in.”

See? Bona fide Python fan. Like Weird Al said “I memorized the Holy Grail really well/I can recite it right now and have you ROTFLOL”

Holy Grail may lack the freshness of some of Monty Python’s less referenced work due to its cultural osmosis, but the Pythons deliver the jokes so well that it’s still fun to sit through again. Personally, I don’t think Graham Chapman gets enough credit for his straight-man (yes, ironic choice of words, I know) performance as King Arthur. For the longest time, whenever I heard about the legitimate stories of King Arthur, I imagined his portrayal.

But really, it’s impressive that most of the characters are played by the same six actors, and it’s done well enough that some audience members probably wouldn’t be able to notice the same actors playing different characters (I certainly didn’t when I first watched this). Obviously, they had experience passing characters off between each other on Flying Circus, but considering that Holy Grail was a (mostly) narrative feature, there was a good chance that it could have spiraled out of control in a bad way.

The ending used to upset me when I was younger, but honestly what could be more Monty Python than building up what looks like it could be a Chimes at Midnight like battle only to have policemen interrupt it and shut down the film production. I could joke that no film has made me hate cops more than the ones who stopped King Arthur from getting the Holy Grail, but it is kind of funny that the Python’s were telling the story of King Arthur to take the piss out of it only to have some audience members be invested in the story anyway. It’s quite silly.