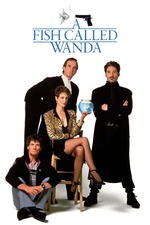 I've been on a Monty Python kick the past few days, but I watched this tonight in tribute to my Grandmother, who died today. She was taken from us too soon at the age of 98 and despite her being very prudish, this was one of her favorite films. I could never figure out why and none of my other family members could either. Just goes to show how enigmatic she was as a person, as I don't think anybody were able to figure her out.

Anyways, just so that this post isn't just a eulogy I'll talk about the film a bit. The presence of John Cleese and Michael Palin is of course going to make people think of Monty Python, and while this isn't as surreal as anything including all the Pythons, I think the dark humor here shows how much Cleese had a contribution in some of their darker jokes (as evidenced by the fact that Season 4 of Flying Circus - while not bereft of laughs or good material - was certainly lacking in bite due to Cleese's absence). The running gag of Palin's animal lover character trying to assassinate an old English lady but accidentally killing her dogs instead seems very much like a John Cleese joke. Even as someone who gets mildly upset when animals in films get killed off, I cackled every time Palin killed one of the dogs and went to their funerals looking dismayed.

Some may walk away thinking that the film is Cleese's mid-life crisis making a vanity project about how he's still attractive to sexy young women like Jamie Lee Curtis, but I think there's enough self-deprecation for there to be a balance (like the scene where Cleese is naked in front of a posh looking family who recognize him, another scene that made me cackle like a hyena). I also particularly liked the scene where Kevin Kline's unconvincing CIA story gets sized up by Cleese's wife, giving her a moment of coming out on top when she's otherwise portrayed as the boring undesirable wife. It's a very well-rounded film and there's a good reason why people loved it then and still love it now.

But, as far as films released in 1988 made by 1/3 of the members of Monty Python, I'm partial towards The Adventures of Baron Munchausen. Funnily enough, while those two productions were happening, when Graham Chapman wasn't busy dying of cancer (dying takes up a lot out of your day, kids; try to avoid it if you can), he acted in the music video of "Can I Play With Madness" by the mighty Iron Maiden! \M/

Man, 1988 was a good year for the Pythons. I wonder what Terry Jones was doing. Um... was he working on Erik the Viking?

Oh, according to Wikipedia, he released a book of poetry called The Curse of the Vampire's Socks and Other Doggerel. Huh. I wonder if that's worth checking out.