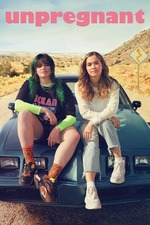 “I should not be here. I should be able to just walk down the street and open a door and waltz right in and say, ‘Hello, my name is Veronica. My boyfriend is an asshole. Here’s my $500. Oh, oh yes, I would love a cup of water. Thank you so much, that’s so sweet of you.’ But no, nope. Why, in the hell, do you need to get parental consent to have an abortion, but not to actually birth a human child? FUCK YOU MISSOURI STATE LEGISLATURE!”

I first heard about Unpregnant as being certain critics’ preferred alternative to Never Rarely Sometimes Always. I watched the latter film with my mom a few months ago, and am finally getting around to this one. And boy am I glad that I’ve seen it.

There is a war on women and their bodies in this country. It has been raging for decades, if not actual centuries. The American religious right didn’t even care about abortion until Griswold v. Connecticut was decided in 1965, and all of a sudden it has become a hot button issue. An issue that politicians throw out there to get brownie points, while arranging for their daughters, wives and mistresses to get the very procedure they are prohibiting their constituents from receiving. Abortion is healthcare. And it just makes so little sense that I could get one easily living in a blue state, while my red state sisters have to embark on a cross-country roadtrip that puts their very lives at risk. Unpregnant was an adventure, and so incredibly funny. But please don’t get this wrong – it could have ended so, so terribly.

I did laugh a lot throughout. And cried. Really, it was the entire gambit of emotions. From disgust at Veronica’s toxic boyfriend who wanted to shame her in-front of the entire school because she didn’t want him (despite him being super nice, oh my God seriously he is owed the world #sarcasm), to the first kiss with a woman in the bubbles of a funhouse, to the bond of a childhood friendship that will never fade as you do your secret handshake and scream “Since You’ve Been Gone.” I also loved how type-A Veronica was in planning everything down to the mile and cent. And then how unapologetically gay Bailey was (“Oh please, you’re not the first person I’ve told. My mom has known for years, and my cousins, and my…”) Ugh, just please keep making movies about teenage girls and their supportive, messy friendships from now until eternity. I will laugh and cry until the end of time.