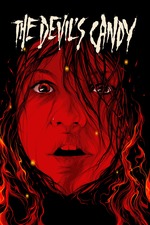 We waited six years for Sean Byrne to follow up the fantastic The Loved Ones and I have to say he came SO close to matching it.

Much like The Loved Ones, he keeps the running time very tight indeed and wastes almost no time with his sophomore movie. It starts with arguably the best scene in the film, as Pruitt Taylor Vince murders his mum after after a quick jamming session to drown put the voices in his head, and it runs fast and hard for the rest of the running time too.

Quite frankly it's about time Taylor Vince played a horror movie villain as he's always had that manner about him and he doesn't disappoint one bit. None of the cast do, in actual fact, and there are two or three other memorable scenes too, such as when Taylor Vince busts into Kiara Glasco's bedroom most notably. It's got a creepy atmosphere with those devilish whispers proving effective throughout, plus the last 10 or 15 minutes are extremely tense and very good.

Buttttttt. Clearly there are a couple of areas here which Byrne rushes through. The whole stuff with the art gallery was very vague on the one hand and also daftly unsubtle on the other hand. Belial? Oh come on. And I'd like to also add an "Oh come on" to the fact that this family are called the Hellmans. I mean, why would you do that, man. That's not too smart, is it.

I appreciate any film that looks to round up its affairs in under 90 minutes, obviously, but you had well over 10 minutes spare here, Sean! Use it to spin out some of the vagaries here and he could have had something almost as good as his debut. As it is, The Devil's Candy is a short, sharp and largely effective shocker that doesn't quite kick on as it should have done but has still left me hoping it's not six more bloody years until Byrne makes something else.