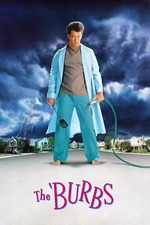 He stopped making comedies and started making 'serious' films. As such, we missed out on him making more films like this and more films where we have to watch him talk to a sodding volleyball for the best part of 2 hours or doing a bad Alec Guinness impression.

Okay, that is been gravely unfair to Hanks and of course he HAS made or been a part of some great films in the 23 years since the release of The 'Burbs. But I can't be the only one who STILL misses the days when you saw his name on a film poster or box and you knew you were in for a funny, charming and thoroughly enjoyable comedy.

I think, though, in some ways The 'Burbs was a great way to end the 1980s for Hanks. Although another comedy, its darker and almost horror movie-esque edge seems like a pretty good signal that the 80s were finished and that he was heading in a different direction. As was much of Hollywood comedy, for that matter.

I think it's my favourite of his films as well. The black comedy in the film is perfectly judged and nicely balanced with the great Bruce Dern's Vietnam veteran now living happily in suburbia with his trophy wife and the 'meatball kid next door' Corey Feldman almost providing the film with a commentary as he eggs on the lunatic behaviour in his street.

I've seen Carrie Fisher's role, as the nagging and disapproving wife of Hanks, receive lots of criticism and while on paper it's not much of a role, it is rather more acerbic and susceptible than most other similar roles in this kind of film. I don't know whatever happened to Rick Ducommun and I could see people being irritated by his absolute idiot of a character but I enjoyed him to a point.

I enjoy The 'Burbs a bit more every time I watch it, but when it comes to Dern, my appreciation of his character and performance is even greater each time. What a great, great actor. And a splendid film.