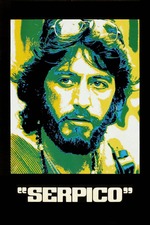 Following his death, both Woody Allen and Martin Scorsese praised Sidney Lumet for what he had brought to New York City as a director through his films.

Certainly, he made great New York films - and great films elsewhere, obviously. But it has been questioned whether he did much for the outside world's view of the city. There is not a great deal that is positive, on the surface, about the place in Serpico, Dog Day Afternoon or Prince Of The City especially. They're all pretty grim films, stuffed with corrupt cops, violent crime, racism, homophobia and general disaffection.

But really, Lumet's New York films were just a subsection of how the city can be viewed in crime films from the very late 60s up until the early 80s in that regard. Very few of them had much that was positive to say about the place. At least if you head to the other coast, Los Angeles had the beautiful weather going for it. New York was always freezing cold or pissing with rain or just generally dank and miserable.

If you dig a little deeper into Serpico, however, Lumet is trying to say a little bit more than the usual stuff about cops on the take and so on. He's trying to paint a burgeoning scene of alternative lifestyles and a new generation of people coming into the police force who might be able to effect change for the good. While it may never turned out the way Frank Serpico wanted it to, Lumet's view is a deeper and more positive one that it seems.

I think that's where Serpico is at its brightest. Certainly, the cop corruption stuff and hush-hush dealing with it at higher levels is nothing we haven't seen before, while the dealing with Serpico's occasionally turbulent private life is rather soap operatic. That's perhaps why I would disagree that this is one of the absolute high spots of Lumet's career. Outside of the notes he tries to make about developing New York social scenes, this is a pretty easy film for a master like him to make.

What he is able to do with the elements of this story that are to the forefront is put across to us just what an uphill and almost impossible task Serpico had facing him. He faces opposition when he least expects it, accused by James Tolkan of being a "fag", an accusation that's later used against him as a reason not to follow up his claims, as one example. Then constantly hounded for contacting "outside parties" about what he had seen and heard.

Helped by a fine Al Pacino performance and a cast of reliables who sweep past you occasionally almost unnoticed, Lumet makes what could have been a serviceable but pretty obvious biopic into something altogether more interesting. Like I say, not nearly his best but riveting stuff and a splendid piece of filmmaking, as you would expect.