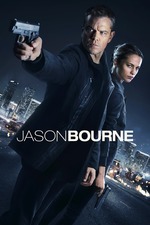 As much as I fully expect that Jason Bourne will garner a very mixed critical and audience reaction, the response of one chap who was in the screening I went to was most unexpected.

About 45 minutes in, a very loud snore suddenly made its presence known. Jason Bourne is a very loud movie as well, so this guy was really rolling 'em home. He stayed asleep for about 45 minutes as well. The perils of going to a 10:15 morning viewing, I suspect. Quite how someone could sleep through this at the cinema, I really have no idea.

Like I say, this one will split opinions right down the middle, I would imagine. Paul Greengrass is back and has he stabilised his cameras? Ooh no. He verily shakes it like a Polaroid picture and as this is a film that rarely stays still for very long, those who found the effect irritating in his previous two Bourne films are best advised to not bother with this. I really don't mind it in the right film and these have always been the right films for it.

The Bourne films have never been the glossy, glamorous side of spy action films. They're not Bond films. They're gritty, dirty, improvisational and relentlessly painful for many involved. The fight scenes are chaotic rather than choreographed. I think the shakycam effect really enhanced that in Greengrass's previous two additions to this series and they do that once again as well.

While the added shakiness may cause many pain, to me it was exactly what I was looking for. There are no lulls in Jason Bourne. It's the most relentless and constantly moving film of the series so far. It starts violent, and it then goes fast and violent for the whole of the rest of the film. No stops off for haircuts or the odd shag. The CIA are never more than a few hundred yards behind Matt Damon.

To bring this series back after a fair amount of time away, the last thing it needed to be was to try and do what the previous three films did. It needed to show a certain amount of evolution and it has. While it makes a big mistake in not exploring the pre-'Jason Bourne' relationship between Damon and Julia Stiles, a story strand that was well deserving of further investigation, it pushes Bourne into a different realm.

He's a dishevelled and desperate man. He's tired, he looks ill and he has no purpose in life. Although Alicia Vikander's claims to Tommy Lee Jones that she thinks she can bring Bourne in might seem like showboating immediately in an attempt to gain her further power within the CIA, as the film progresses it does increasingly look as though it's the only choice that Bourne has. What IS he doing with his life? What is his purpose?

Rightly, Jason Bourne doesn't stop to examine this in too much detail. That's clearly being left for the sequel. It's too busy clearing up odds and ends and characters. It evolves its narrative not explosively but with small movements that could easily open these characters up to a whole raft of new possibilities. Vikander's motives are constantly shadowy and she is going to be the key figure in this series' development.

In terms of action, it cuts down on the clever gimmickry and improvisational genius that has kept its title character alive for so long, instead opting for a more blunt force approach to its scenes. The Athens riot scene is brilliantly staged, beautifully shot and enjoyably unpredictable. A chase through London is similarly so. Its refusal to slow down matches its lead character so well that even a nondescript Steve Jobs-esque character that the talented Riz Ahmed battles gamely with is not allowed to slow down matters too much.

Jason Bourne possesses all the elements I wanted for the rebirth of this series. It puts a lot of old issues to bed, doesn't overdo new issues and characters, and casts genuine doubt on the future of Bourne. That latter point was always going to be the most difficult with such an established indestructible figure, and even more so when he only gets about ten lines of dialogue in the whole two hours!

Yet not only does it have time to create a thrilling action film in its own right, it essentially writes the whole of the main plot of the next film as well. A remarkable effort, certainly helped by another powerful and magnetic performance from Damon and also by a strong effort by Vincent Cassel as his main pursuer.

Look, all I'm saying is that if you fall asleep in front of this one at the big screen then maybe there are some medical issues you need to have explored.