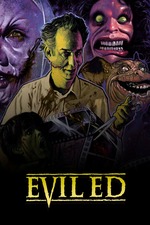 "Where in the the fuck is my beaver rape scene?!"

For my visit to Sweden, it was a choice between Let The Right One In and Evil Ed. Romance-y vampire drama versus bloke who goes on a murder spree after working on too many horror films. It's a Friday night, it was obvious what was going to win.

With a lot of the films that I've been watching in my scary bastard month of films, I've been looking up on the brilliant Melon Farmers website that I am indeed watching the full uncut versions of these films. My testing point with this one was whether this scene, which was cut from the 1997 and 1999 video releases in the UK, would still make it:-

"The Unrated Version was passed 18 after 2s of BBFC cuts.

The cut scene is in a clip featuring the maniac "Loose Limbs", the cut being applied to blood from knife wounds running over a woman's naked breasts."

It was still there! Woo hoo! Yay! Yeah. The BBFC (British Board Of Film Classification) were bloody nuts about anything involving boobs - you weren't allowed anything on boobs. Boobs were fine on their own (I'll say they are, ooh!), but if they got anything on them at all then they didn't like that. They didn't like that scene in Demons where a bloke scrapes cocaine off a woman's boobs either. Boobs were sacred - not so much these days, it seems, as they allow this stuff quite happily.

What the hell am I wittering on about here? I'm sure I had a point to this when I started. Oh yes, I was going to say that, actually, Evil Ed isn't quite as violent as I was expecting but these stupid BBFC cuts would often draw attention to a film which wasn't nearly as bad as their sometimes hysterical reports would have you believe.

It is quite mad, though, I'll give it that. It did make me chuckle that there seem to be some slight similarities in the narrative between this and the apparently completely polar opposite Berberian Sound Studio, which I bloody have to see as soon as is possible. It tries the horror comedy thing, goes more for the comedy than horror, and it is quite funny in places.

Not an all out classic by any means but the regular nods to other horror films were fun to spot as were the posters for other horror films that you often see dotted around the studios and Ed's home. It's a good laugh with a great ending (plus I love the fact that one of the burglars is carrying a sub-machine gun) and I think I probably made the right decision.