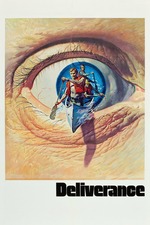 It's interesting how pop culture can appropriate a film scene and turn it into something that would appear to have lost its initial power.

Over the course of the past 40-odd years, the scene in question is something that has become one of those shocking incidents that has been appropriated into often humorous situations or references. There's nothing sinister behind it and, indeed, there's nothing necessarily wrong with it.

Yet with many scenes that have been subject to this treatment, the vast majority of the time their impact is significantly reduced. So I was really surprised when I watched Deliverance last night, for the first time in about 15 years, and found the scene in question to be still incredibly powerful and brilliantly horrible. It's a draining and dreadful experience that has rarely been matched in cinema since for that particular kind of crime.

Curiously, however, some other parts of the film perhaps haven't survived referencing and influence as well. For instance, the snobbery that a couple of members of the party show to the locals is something that has been done so frequently in films since then that it doesn't really stand up all that well. Fortunately for Ronny Cox, not many attempts at Duelling Banjos have been made since so that scene is still great.

I also think the last 15 minutes or so are quite messy. The cover-up is unravelled far too quickly and far too improbably and it struck me as an ending that didn't really know what it wanted to be. But there are still a couple of very strong elements to Deliverance that make it a pretty highly recommended watch, and that's outside of the excellent performances by all of the four leads.

The second half of it all, when it lapses more into adventure-thriller territory, are excellent. They are quite simply mounted and are not launched into some extremely unlikely and silly territory that wouldn't sit well with the rest of the story. There is also the way the group dynamic works as well. They're not portrayed as outright buddies from the start - there are some divisions there, which makes later bickering seem all the more realistic.

It's a thrilling ride for enough of its running time and a really good film for the most part. But I still maintain it's no Southern Comfort.

In Search of a Midnight Kiss