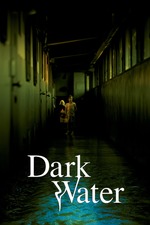 By and large, I haven't revisited many of the films from the height of the J-Horror and K-Horror crazes.

The main reason for this is because I came to the realisation a few years ago that most of them weren't very good and also that most of them were pretty much exactly the same. For instance, if you had seen the whole of the Whispering Corridors series and I showed you a random clip from one of those films, would you know what film it was from? No you wouldn't. They're exactly the same.

Dark Water is one that I was nervous about revisiting because it was one of my favourites from during that craze, which I followed quite closely and watched films from as it progressed. I didn't really want to discover that it actually wasn't very good even if I thought I could live with the fact that it might be the same as most of the rest.

But my fears were put to rest, thankfully. Dark Water works better than most of those released around it because it's as much a drama as it is a horror film. There's surprising depth here about parental difficulties being passed down generations and the effect they can have on those around them, and while it does lapse occasionally into melodrama, the base story is quite a strong one.

As such, Hideo Nakata (what on earth has happened to his career?!) isn't afraid to frame his lead, quite well played by Hitomi Kuroki, as being in the wrong on a number of occasions while also being sympathetic to her background. She's a surprisingly complex character for a horror lead and that's perhaps one of the main reasons this is such an effective piece of work for the most part.

It's not scary, so much, and the occasional jump scare is well earned, but when Nakata was at the height of his powers, he could build dread and unease superbly. Shot in a greying, crumbling apartment block that seems to attract rain, there's a distracting dreariness to the setting that adds to the effect. Really pleased to see this still stands up so well.