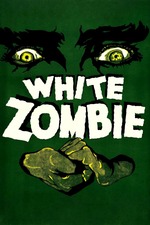 Featured by Will Sloan

"A rough, downmarket film in style and spirit, White Zombie doesn’t feel like the kind of movie that should feature a newly minted Hollywood star, but it does feel like the kind of movie that couldn’t afford Karloff. Officially set in Haiti, but seemingly set in an inkwell, it stars Lugosi as 'Murder' Legendre, a voodoo master and sugar mill owner who controls a small army of mindless zombies. Looking like Satan himself with a unibrow and goatee, 'Murder' is hated and feared by locals and visitors alike. Nevertheless, he is the sort of man who can get things done, and so is recruited by one of the island’s few white inhabitants to break up a marriage between two others. 'Murder' uses his powers to knock out the bride and control her as a zombie, but then decides to keep her for himself. Yes, the title does mean 'Caucasian.'"