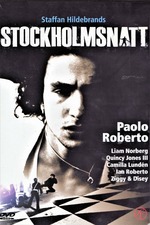 Screen Slate's friends at Le Cinema Club recently invited us to pick a film for their weekly streaming selection.

"Amid the proliferation of stereos and VCRs in the 1980s, Sweden’s youth culture was taken with The Karate Kid, horror movies, and hip-hop, ushering a new wave of counter-culture and youth rebellion. This also led to moral panic over videovåld (“video violence”), Sweden’s own version of the UK “Video Nasties,” which elevated movies by homegrown exploitation filmmakers like Mats Helge Olsson to must-see status. A notorious episode of social debate program Studio S established the pervasive belief that the VCR was responsible for cultivating a new league of violent degenerates. And just as they swept midwestern American mini-malls, taekwondo and kickboxing made the Swedish juvenile offenders’ feet their weapons of choice.

"The new subculture, known as “kickers,” was immortalized in the most unlikely of fashions: Stockholmsnatt, a polished feature docudrama financed by Sweden’s state-owned telephone company to discourage payphone sabotage. This was a big mistake: a trend that most people weren’t even aware of went national, and the young stars such as Paolo Roberto and Quincy Jones III, who played fictionalized versions of themselves, became icons. According to Daniel Ekeroth, author of Swedish Sensationsfilms, Stockholmsnatt was shown in schools to every child in Sweden. It likely created a version of what’s now known as “the Streisand effect,” encouraging more destruction of private property than it stopped." Read more about Stockholmsnatt here.