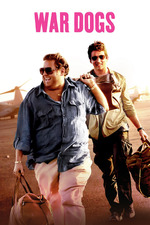 "AEY doesn’t stand for anything," Jonah Hill tells a new crop of prospective employees, and he means it literally — the three letters of the "acronym" don't represent the first letter of three words, they're just letters that Hill threw together to "sound professional" — but it's also true figuratively. AEY doesn't stand for anything morally, they don't have any principles or scruples in their business practices, they sell weapons and ammunition to the U.S. military without any concern for the quality of those goods or for where they might be going or what purpose they might serve.

Jonah Hill's business partner Miles Teller joined up because it's a lucrative enterprise, at least by his standards, and Teller was tired of his life as a massage therapist, but his girlfriend Ana de Armas is staunchly anti-war and doesn't approve of Teller's new vocation. "I'm against the war too," Hill explains, he's not in this line of work with the purpose of encouraging U.S. militarism or imperialism, he's not even a patriot except when it's good for business, he's just in it to make a buck.

And so is Teller — he bought in to the business because he was anxious about being able to support a child — so both of them are willing to look the other way when it comes to the consequences of their employment. Surely, the military would simply buy guns from someone else if AEY didn't supply them, right? So Hill and Teller do the dirty work, and maybe they pinch their nose to avoid the smell at first, but any ethical dilemmas they have with their careers at first eventually fade away.

They don't stand for anything—and it feels like the movie doesn't either.

The turning point for Teller comes when Hill persuades him to fill a contract by disguising ammunition that violated an American trade embargo. Bullets are bullets, right? So as long as they don't notice the bullets were made in China when they're not allowed to buy or sell from China then everything should turn out fine, right? This deception is what causes Teller to start questioning AEY's business practices, not the fact that they're selling bullets to the military. It's not the contracts themselves that are the problem for him, it's the way they're filled.

This conveniently skirts any critique of the U.S. military or government, and the most damning fact of the matter is that it's not even true to life. David Packouz, the real-life human being who Miles Teller plays in the film, was much more politically minded in his understanding and disagreement with their business model. "It was how things were done in international arms dealing," he said in an interview published in Rolling Stone. "The defense industry and politics were extremely intertwined — you couldn’t do business in one without dealing with the other. Your fate depended on political machinations behind the scenes. You don’t even know whose side you were on — who you were helping and who you were hurting."

Even after he and his real-life business partner Efraim Diveroli (Jonah Hill's character) are caught and sentenced, the film hides Packouz's true qualms: "His real regret is political," Guy Lawson writes in his extensive article on the two men. "He believes that he and Diveroli were scapegoats, prosecuted not for breaking the law but for embarrassing the Bush administration. No one from the government has been charged in the case, even though officials in both the Pentagon and the State Department clearly knew that AEY was shipping Chinese-made ammunition to Afghanistan."

War Dogs chooses not to tell this side of the story, instead focusing on Packouz/Teller and Diveroli/Hill and their masculinity-in-crisis, their homophobic jokes about Packouz/Teller's job as a massage therapist, their obsession with Brian De Palma's Scarface, their desperate need to prove themselves as men (and for Packouz/Teller, as a father). And there's almost something there, something about the destructive nature of toxic masculinity, but here the film also lacks the courage of its convictions and traffics (ha ha) in the same repressed bigotry and glamorous violence that it claims to critique.