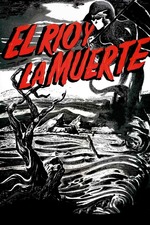 The River and Death

I Think Luis Buñuel Is My New Favorite Director?
Let's Complete His Filmography and Find Out! [11/15]

It's all about honor and tradition and machismo. There's an old village in Mexico where men can legally kill each other if they perform a post-murder ritual that's part social banishment and part moral cleansing. Along the village runs a river, and if the killer crosses the river they're allowed to live in the unsettled wilderness on the other side until their debt to society is paid.

It's not an easy trial, but because murder is technically legal it's basically The Purge 24/7 in this village, and as a result there's a lot of macho posturing and cyclical paying of debts. The family feuds take on an almost Shakespearean quality, with one man killing another man to uphold his family's honor because that man killed a man from his family all because one family's father killed the other family's father decades ago because his cow was grazing on the wrong pasture.

El río y la muerte is strangely both compelling and disappointing for me. I buy its critique of honor and masculinity as excuses for juvenile barbarism that enable endless cycles of death, but this analysis is mostly on the surface and feels a bit shallow, and more importantly I think it misses an important point about the power of ritual and tradition.

This village's violence customs certainly appear pointlessly destructive from the outside, but to the residents of the village they have real power, they have a deep cultural significance. We get a little bit of this from the protagonist's mother, who is still deeply enmeshed in the symbolic network of meaning these practices provide in contrast to her son who grew up in the Big City and is now Enlightened with the Knowledge of Progress, but then the whole thing comes to a rather simplistic conclusion.

The river and the cemetery become heightened symbols that occupy an important space in the psychic economy of this village and its residents. They take on an almost mythic quality, like Monument Valley for John Ford or like Mount Olympus for the Ancient Greeks. It's compelling worldbuilding for what was a rather common story in Mexico at the time*. In a story about social symbolic significance, they become the central symbols of constructed culture.

A Woman Without Love