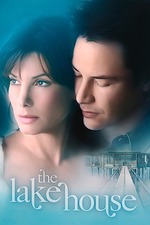 The film requires a strong commitment to suspending disbelief and an equally strong resistance to pursuing the logic of its time travel motif. And once you've done that, you still have to forgive some of the clumsily handled magic realism and the weird, glammed up costuming of Bullock.

There's a lot to like here. A lot. Reeves is especially good. And the scene in the middle of the film where Reeves and Bullock meet at a party? An all-time great, pantheon romantic scene.

Director Alejandro Agresti also does a really nice job emphasizing detailed naturalism in the context of the fantasy. And writer Auburn and Agresti do a nice job, too, softening the edges of the film's antagonists. Christopher Plummer's distant, careerist father and Dylan Walsh's overbearing suitor retain their humanity, making the film more satisfyingly complex. And it's in these ways that the film often feels more European in sensibility than Hollywood.

And opening the film with The Clientele's "(I Can't Seem To) Make You Mine"? There was just no way I was going to hate this movie (again).