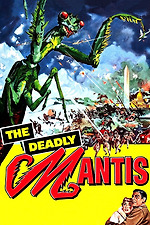 Failing to distinguish if these films are in fact trying to be serious or if it's all a playful parody. Either way it was more entertaining than others of the same caliber because it's downright hysterical at times.

The Mantis stomps its way toward a building, building up fearful anticipation. Then we cut to our protagonist sitting at his desk, reading notes. Cut back to Mantis, getting closer. Back to our "hero" none the wiser. Clearly, any tensity that was made gets cleared out faster than a fart in a fan factory.

For a good 33% or so of the film, they scrape by their nails to try and rummage up mystery behind the creature. Well, when your film is called THE DEADLY MANTIS with a picture on the poster, all attempts are futile. Nice try, but you're shooting blanks fellas.

I will say the structure of the beast, all camera angles and motion are handled greatly. Scale is nailed and it looks larger than life. The dogfights were a neat touch too.

Fairly competent, but again the people are forgettable, it's hard not to start laughing, and all technical qualities not involving the Mantis fall way short.