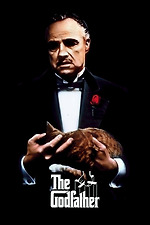 The Godfather is great. Everything about this movie is immaculate even if it is a lionized and glamorized version of Italian mobsters. The film centers around the young son of an Italian mob boss who avenges the shooting of his father and slowly makes his way however apprehensively into the family business.

Acting is great all around the board. Marlon Brando delivers an excellent and elegant performance as Don Corleon and it serves as the performance he’s most synonymous with. His downfall is both entertaining and subversive. You think he’s done for half an hour into the film but an hour later he’s back to doing what he knows best even if his inevitable end comes shortly after. Al Pacino is great in the movie, he has these full-of-life eyes where you’re able to tell where he’s coming from even without speaking. His performance is one of innocence but also tenacity. His transition from outsider of the family to Don is one of subtlety and is earned 100%. His arc is one I can relate to as it pertains to a son trying to distance himself from his family only to be sucked back in. I don’t feel like the film specifically refers to this as ‘fate’ however it is something some people can relate to (me included) as I’ve tried to become the first in my family to step outside of the box only to be drawn back in to my families expectations which is very real but in a tragic sort of way. James Caan is also great in the movie, he does a fantastic job being the tough, short tempered son of Don Corleon. All of these 3 characters together create a unique dynamic even if they aren’t utilized in the same room that often if at all they compliment each other through unique situations whether it be Vito chastising Sonny or Sonny humoring Michael or Vito advising Michael.

The scenes that stand out to me the most is definitely the shooting of Vito Corleone, Vito talking to the other mob bosses about the drug business, Michael taking out all of his enemies at once and the final one where Michael both literally and metaphorically shuts out Kay. The movie has a level of subtlety to its scenes that can easily be mistaken for slow or unengaging but I believe they’re utilized very effectively making the scenes I mentioned above stand out more.

Some issues I have are that there are moments talked about but we never see occur. Like Moe beating on Fredo. Some of the side characters get blended into each other and It looks like Fredo hesitates and could have at least shot at Sollozzo after he shoots Vito. The pacing is also kinda whack as the film is supposed to span over 10 years but never feels like it, there’s no sense of time. Aside from that though it’s a really good film through and through. Every moment culminates to that final shot where he’s finally addressed as Don Corleone and it feels so satisfying after everything that’s happened. It leaves room for other installments and it clearly reminds us that the story isn’t over.