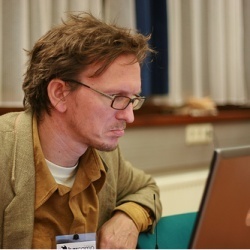 Film critic and ex-film programmer from Graz, Austria.
Lived in Texas for a while. Was in 2 movies.