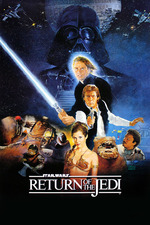 This film contains the best and worst material of the franchise.

Second death star is an incredible idea. Still under construction and protected by a shield, we sense the danger and the vulnerability. The Emperor is coming and everyone loses their shit. Nothing wrong here.

Deleted scene of Luke constructing light saber should have been left in so we get some sense of finality to his training. Jabba's palace is average at best, so let's trim that down the essentials. At the sarlac pit we should also allow Boba Fett to escape.

Luke and ObiWan is half good, build up toward the final fight with Vader. That's all good. However, the explanation of the family is the weakest piece of cinematic writing ever and we all know it. BOOOOOOO. I'd be okay with maybe ObiWan not having the heart to have told Luke and that he died before he could tell him, maybe, but he should have told him about Lea.

Lando should not pilot the Falcon for the final assault on the death star. Han and Chewie should. Instead, let's have them switch places. Thus Lando and Lea lead the assault on the shield generator with Luke. Luke gives himself over to Vader (all of which is fine in the movie).

During final assault Boba Fett helps the Empire protect the death star as a hired gun and he and Han have a final big to do during the destruction of the death star. Big Han moment, deserved death for Boba.

Striek e-woks all together and instead save room for Lea and Lando to have a big show down with imperial troops protecting the shield.

Shield goes down (maybe allow 3po and R2 to play an important/comedic role in the fight that the e-woks were supposed to. Luke and Vader have a somewhat less anti-climactic light saber duel. Vader's face revealed. Death Star/emperor destroyed.

Celebration all around galaxy. Han returns to Lea on Endor, they have their love each other beat. Luke burns Vader. Luke returns to celebration and sees Ghost yoda, obiwan and anakin (original actor).