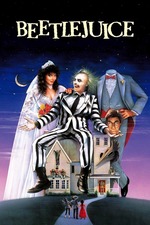 It had been many years since I watched this in full, and was completely unsure of what to expect. I've always considered Burton to be a terrible director, so I was apprehensive when considering his "prime" years. As it turns out, he never really had a prime. As a filmmaker, his ability to construct a narrative, build momentum, or even display some semblance of editing rhythm is basically non-existent. Things just sort of happen in Beetlejuice, and my patience with it began to wane as I realized it was never gonna evolve into something gripping. Sure, Keaton is fun, and the way the shrunken head guy looks at Geena Davis is hilarious, but that was about it. I can see completely why so many are drawn to this, but it's simply not for me. I liken Burton to Lynch in that there is a visual style and distinct design elements consistently at play with both, but only one of them knows how to make films.