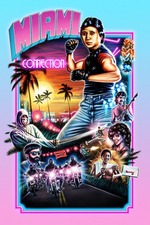 Miami Connection is the near pinnacle of a garbage movie masterpiece. It is a defining moment in the genre of "So Bad It's Good." Any true fan of trash has got to add this to their collection.

Miami Connection takes us back to 1987, when the city of Miami was actually in Central Florida and was actually Orlando. It tells the story of these five dudes living in a house together who play in the most awful band/Tae Kwan Do club ever. As the film unfolds, they become harassed by another band, violent bikers, and cocaine dealing ninjas. From what I could tell, most of the anger against them stems from the fact that they got a job as a house band at a club where the other band used to play and where the bikers like to hang out.

Everything in this movie is terrible, as if everyone on board had terrible down to an exacting science. Scenes, such as when one character randomly breaks down into tears for an extended monologue about his lost father while everyone else tries not to look bored, seem to be written for the precise purpose of being as terrible as possible. Nobody can act. The fights look cool...if you speed them way up past the agonizing slow movements the guys used so as to not actually ever hit each other. There's a complete disdain for continuity.

If you are not laughing through this entire movie, then you are a pretentious snob and should live in France and only watch movies with film festival awards on the cover and not communicate with Americans ever.

The very best part of this movie is that you can watch it one of two ways. Well, I'm sure there are more I've yet to discover, but these are my favorite:
1. It can be, as explained, a movie about 5 (sometimes 4 in fact...the 5th guy just sort of comes and goes as if he didn't really matter) guys trying to overcome evil bikers and ninjas so they can play their gigs in peace. Oh and achieve world peace.
2. It is the most amazing documentary on the benefits and pleasures of Tae Kwan Do you will ever watch. Oh, and you may achieve world peace by watching it and learning Tae Kwan Do.