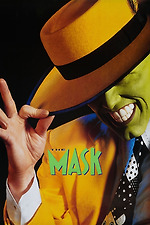 Watched this when I was 5, thought it was the greatest thing I'd ever seen, then never saw it again until now. I think I laughed just as much as I did then. It works much better than anyone could necessarily imagine, there's something really fun and unique about the production and performances - I mean, really I could just list off little things like the mullet-ponytailed henchmen, the boss torturing Zed with the golf tee, Richard Jeni's strangely magnetic performance, the senator from the Sopranos doing the detective thing, with Jim Carrey never-better just barrelling through it all... just really worked for me.