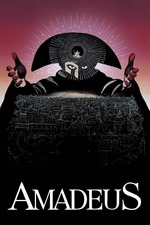 As a film i don't have much to say about it, i think it is a flawless piece of art and a masterpiece,and it does an excellent job at portraying wolfgang mozart very accurately, instead what i want to talk about is the historical inaccuracy in the portrayal of Antonio Salieri, that paints him as a bitter, jealous, hateful man, and a washed up, mediocre composer. Which is absolutely NOT true, first of all he was much more famous and more celebrated than mozart at the time when they were alive, and it's such a shame that people today only know him as someone who was jealous of Mozart's talents and musicianship, for starter there was no vicious rivalry between mozart and salieri, atleast not to the extent that is shown in the movie, and if there was any rivalry, it was on a professional and artistic level not a personal one, Salieri did not speak ill behind Mozart's back or accuse him of molesting his students, nor did he send a maid to his house to spy on him, in fact their relationship was quite wholesome and friendly, salieri was very supportive of mozart and his music, and he actually attended most of his operas and concerts, which mozart was very appreciative of according to some of his letters to his wife. And if you're still wondering where did all these rumors come from? Well... it all started with a letter mozart sent to his wife when he was ill, around the time of his death, where he states in it "i feel like I'm being poisoned", and this letter led to many conspiracy theories, especially from the growing german nationalists at the time and composers who wanted operas to be produced in the german language, and at that time it was mainly believed that operas should be done in italian, and the opera directors in vienna were mostly italians too, the biggest one of course being Salieri, so that made him a target of rumors and attacks by the press, which somehow eventually led people to believe or want to believe that he had actually murdered mozart, and of course these rumors were excruciating to salieri's well being and mental health, and along with his dementia, it all led to his downfall, to a point where he actually made a suicide attempt in 1823, two years before his death, and it's worth mentioning that in 1830 alexander pushkin wrote a play called "mozart and salieri" where the character of salieri murders mozart, which further pushed this insane narrative, and this play inspired another play by peter Shaffer in 1979 called "Amadeus", which was eventually adapted to this movie in 1984.
Rip Antonio Salieri (1750 - 1825) and Wolfgang Amadeus Mozart (1756 - 1791)

An Officer and a Spy