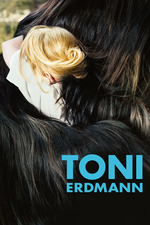 The seriously rare type of dramedy to be found made nowadays, even if its familiarity and often slow-driven nature can make it seem look otherwise. Even that if follows a completely clichéd base and structure, but the work done by the talented hands of Maren Ade inside it feels completely original in the comedy-drama status type of films. At one side is a sort of human behavior study filed to the bone of Cassavetian traces of inner physiological turbulence and about to erupt feelings. At the same time that is filled with a screwball comedy sense of humor of unexpected moments of laugh out loud hilarity, even blended with the slow paced naturalism of its heavy character drama structure.

While much of its mise-en-scene exposes a great sense of individualism and coldness in European social relations, living under a control of capitalist focus, which is reflected in the relationship between father and daughter that builds the narrative basis of the film and the common stages and dialogues of burocratic business meetings and heavy focus on stratagems and cold relationships that the character of Ines goes with her life, while her father Winfried tries with all the creativity insanity he can think of to bond again with his daughter and enlight her to a more humble and easy going life of empathy. The tone around that may be at times heavily bittersweet, but with the (long) time taken, you start to see and feel how much heartwarming sweet and naively innocent these characters carry with themselves.

Both Sandra Hüller and Peter Simonischek follow the nature of their script, but do an excellent job with what is given to them on top of this story and the relationship of father and daughter that they manage to build with such conviction. At the same time they convince in an extremely natural way the minimalist sense of each of their personalities where each one reveals dense levels of complexity that are barely said or informed within the film, about who they really are or how their relationship is, because everything in around them is built through unfailing impressions and feelings of what each one makes the audience feel towards both characters, and everyone around them. And this is so much for the always constant humor, but also for the dramatic load that each moment carries, although little is erupted on screen.

It's almost a silent film by tone and nature in that sense, but within that silence and these small exchanges of affections you can see so much sweetness and emotional complexity in the characters that makes you learn to love and feel for them till the end of the film, and hope for a possible meeting of happy and affable reconciliation, which might make both daughter and father don’t fall immersed in the silence of sadness and loneliness that often haunts them. Sweet and sad, but definitely a special film that deserves to be remembered!