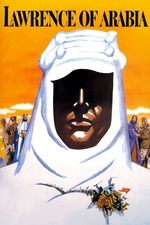 David Lean's Lawrence of Arabia is an undeniably great film due to its depiction of the larger-than-life true story of T.E. Lawrence and the sheer magnitude of scope presented on screen.

This film is EPIC...that's the only word to describe this, even grandiose feels far too minuscule, unfortunately EPIC does not automatically translate into an enjoyable, entertaining time for myself. The film left me more with a meh feeling...impressed, but meh.

Freddie Young's cinematography is quite impressive on occasion, but outside of a handful of shots and sequences I get the feeling he is merely capitalizing the monumental beauty inherent within the desert. I did, however, love when the camera would drift off and focus on the shadows, it effectively broke up the monotony of people on camelback languidly trudging through the desert. The highlight for me was when the tribes were departing on their raid and the camera breaks for a few moments, focusing on the women of the tribes with their trilling resounding through the desert from atop the mesas (really the only time women are featured in the film).

Lawrence of Arabia is one hell of a film from a technical, critical standpoint, but from the standpoint of personal enjoyment...let's just say, I will probably never watch this film again.