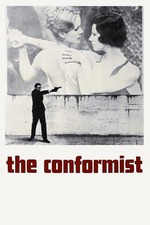 A character study of a man with no character. The Conformist is Bertolucci’s denouncement of fascism and bureaucracy and, after seeing the film a second time, it has garnered even more favor with me than before for several reasons. For one thing, I noticed how totally radical and out there this movie is—particularly in the first act—both stylistically and narratively. I think Bertolucci was attempting to convey the absurdity of fascist ideology in a cinematic way through some of the bizarre events that take place in the first hour of the film, as well as the inventive, yet subversive camera techniques and narrative devices put into play. Not only is the cinematography some of the best in the history of film, but it’s also rather peculiar and idiosyncratic; Dutch tilts, abrupt zooms, pans and extremely low angle shots add to the sense of abnormality and displacement that our protagonist is experiencing. For its time, these were innovative approaches and legendary DP Vittorio Storaro blends traditional camerawork with this new, inventive shooting style with ease, signifying the mixed emotions felt by Clerici.

I see Marcello Clerici as an obedient hound; he runs when he is called and he does what he is told. The film shows us that he is a victim of childhood abuse and carries with him a deep trauma which causes him to seek power and acceptance wherever he goes, but this longing is misguided and severely skewed due to his fickle nature and the political climate he has found himself living amidst. He is a deplorable, grossly capricious man. He seeks to abandon his newly-wedded wife at the first sight of a beautiful woman and has no true courage in his militant, totalitarian convictions. What we’re seeing in The Conformist is a man of great cowardice who has found himself in way over his head, seeking escape internally and externally, despite trying to keep up the appearance that he has it all together. Much like the Manganiello character—who Clerici is constantly trying to evade while on a mission to assassinate his former university professor, a now anti-fascist intellectual—and the forces of power he has foolishly devoted himself to, his pusillanimity is bound to catch up with him. And that’s exactly what happens when he the time comes to carry out his duty to kill the professor.

The professor, it should be noted, sees right through Clerici’s veil of fascistic devotion and right-wing extremism, calling him out on it when they meet for the first time since Clerici abruptly left university some years prior (another signifier of his variable nature). Even still, Clerici cannot bring himself to kill him when that bell must be rung. He feels weak and helpless—like a shunned child—in the face of the defenseless professor, simply because he knows that Clerici is not what he portrays himself to be. And since Clerici is a shameless conformist, when Mussolini is finally ousted from power in ‘43, he then denounces and condemns his old fascist ways, when he by chance encounters his abuser—now old and frail, but actively grooming another young man the same way he did Clerici—while walking with his vision impaired protégé (a clear and cleverly thought out metaphor regarding the blind allegiance to Italy’s fascist regime and rampant conformism of the 1930’s and 40’s) on the night the dictatorship falls. Clerici confronts the man who abused him, but freezes up, finding himself once again helpless to act on his own accord and the man escapes Clerici‘s clutches.

Such depth and complexities are seldom found in cinematic political denunciations, which is a testament to Bertolucci as an auteur. Never does he ask for our sympathy for the flagrantly repugnant, cowardly Clerici—nor should he, as Clerici is not a character worthy of sympathy, regardless of his dehumanizing past—what he does do is provide a detailed, plausible and sadly all-to-common reasoning for why a man of means with no backbone and a high level of susceptibility would become such an abhorrent ideologue. The universality of this story simply cannot be understated and therefore it transcends its setting and, as we’ve seen in recent years all around the world, fascism is far from a dead, historical topic; it still runs rampant everywhere and cinematic works like The Conformist are important reminders of how dangerous these kinds of ideologies are. It’s very similar to Pasolini’s Salo in many ways, although not nearly as visceral or graphic. Not only in the condemnation of absolute power, but with regards to how absurd the film gets at times and how it doesn’t shy away from taboo subject matter as a means of getting its political point across. This is no surprise, considering Bertolucci got his start working under Pasolini on Accattone.

Overall, The Conformist is a dense work that merits multiple viewings in order to fully grasp everything Bertolucci is putting forth. Not to mention the plot structure and pacing, which, upon my first watch, didn’t really work for me, but this time really clicked and I found both the internal flashback-centered narrative and slow pacing to be wonderful choices for the film. We do stray from the central themes a little bit in the middle of the film when Clerici and his wife are in Paris, though this can easily be forgiven because of the little things that are thematically relevant which occur between (and often times during) those divergent sequences. Not quite perfect, but damn close; a masterpiece of dark, politically charged humanism.