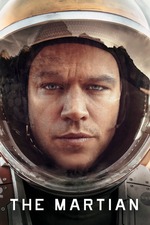 Unexpectedly and refreshingly not a remake of Robinson Crusoe on Mars; the fact that Scott focuses as much (if not more) on the Earthbound rescuers than our titular space pirate makes for a fast-paced and sufficiently complex narrative focus. It's a blessing and a curse, as the cool science shit Damon does far overshadows the boring science shit trained NASA professionals do yet we're denied some of the former to make room for the latter, even if the pacing overall benefits from it. Strangely, the psychological effects of loneliness are only hinted at. One last complaint is that the final 30 minutes are both exciting in concept yet weirdly reserved, visually, which lends a jarring tonal shift for the climax of the film. And the epilogue should have been completely excised.

However and again, unexpectedly, I think I'll come back the The Martian down the road because there's some potentially interesting things to muse on i.e. colonialism, the economics of publicly-funded space travel, and the titillating and potentially religious/political idea that those who can be saved must first save themselves. The Martian, while not an exceptional movie, shows that even in the idea-starved summer-blockbuster atmosphere, seeds of greatness have the potential to bloom.

Birdman or (The Unexpected Virtue of Ignorance)