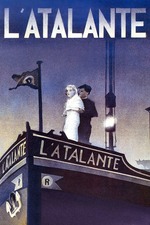 Endlessly charming, Vigo's only feature-length film is more remarkable for how balanced it feels; with scenes of humor, sadness, romance, and jealousy all given equal weight. L'Atalante covers them all while doing each well, with Michel Simon's Père Jules handling most of the humor while the heavier stuff sits in Dita Parlo and Jean Dasté's lap. So good, in fact, is the chemistry between Parlo and Dasté that I had to double-check afterwards that they were not a couple in real life at the time of filming. Such naturalism is astounding, but then again, Vigo's impact on realism has long been a bullet point in cinema's history.

Another eminently 'comfy' story, this tale of honeymooners has also done something no film, brochure, or travel guide has been able to do so far: make me want to visit Paris. Granted, the city itself doesn't get much of a scenic overview, but the little shops, streets, and docks that do show up onscreen are enticing, and perhaps its Vigo's resistance to give the film a 'touristy' feel while centered around two tourists play a large part in that.

Lastly, I can only imagine the wonderment caused by L'Atalante's finale - there are some wildly impressive technical flourishes to cap the picture - from Vigo's camerawork while the two lovers sleep in separate beds to an underwater scene that perfectly captures the idea of cinematic magic. Regarding that last bit, what impressed me most of all in an altogether impressive film was the way the finale tied into a scene early in the film. I don't have much of a reservoir of knowledge on films of this era, but that call-back feels fairly unique up to this point, and instead of a series of sketches, ties the film together as a groundbreaking innovation in narrative structure.

So: Parlo is 2cute4me, Paris is beautiful, and L'Atalante would be an excellent choice for someone who might be a little daunted by or ambivalent to film's early days.