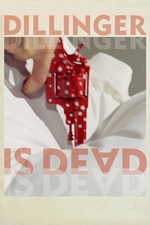 For half an hour, we watch a man cook his dinner while disassembling a gun of questionable origin found accidentally. We watch him travel back and forth across the kitchen, gathering spices, cutting vegetables, stirring pots - only occasionally coming back to the table to take another piece of the gun apart. There is barely any dialogue, rarely any cuts, and a too-brief introduction of a new character - radio music, bubbling ingredients, and the clack of metal on the table is all we hear. Finally, at the end of the first act, the meal is done. Our man sits down to eat, and it is quite simply one of the most satisfying scenes you'll ever see. The combination of build-up and apprehension about the gun make the payoff of that first bite taste so sweet. The next act swaps the making of dinner with watching random home movies and avant-garde films. So goes Dillinger is Dead.

In reality, Dillinger is Dead is an allegory of how the suffocation and anxiety of sheltered living can cause members of society, or society as a whole, to act irrationally and oftentimes violently, in order to break the stagnation. There's also something about the desire for control (cooking his own meal) and the dangers of fantasy (watching the home movies), but those are two nuts I haven't completely cracked quite yet.

Dillinger is Dead is a strange, slow, arty movie, but like the first bite of that meal, we know there is a definite payoff coming, if a little less satisfying. The entire thing plays out as one long act of foreshadowing, so the ending is not surprising at all, even if it is shocking in its suddenness and simplicity. I can understand why this film doesn't have more of an audience thanks to its inherent abstractness, but its ambiguity of logic and deliberateness in pace leant a dark humor and surreality to all the waiting around it made me do, and I kind of liked that. If all that sounds incredibly pretentious, it probably is - Dillinger is Dead is too strange for me to decide if it's too smart for me.