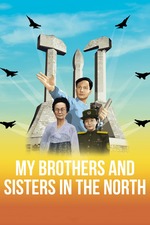 Recently, I've been having some second thoughts about tankies. I can't always discern where their opinions come from, thus it's hard to evaluate the basis for their positions on various agents of the Left. What I do appreciate is when their sources are shared so that I myself can interface with those sources. To their credit, tankies are nothing if not generous about this information.

MY BROTHERS AND SISTERS IN THE NORTH is available in full on YouTube. It's a documentary directed by a German woman of South Korean descent. She speaks Korean, but because she's a German national, she can enter the DPRK without restrictions imposed on South Korean nationals. Her film is structured as a wide-ranging inquiry into a nation from which she is estranged, despite inner feelings of kinship.

It seems like a disservice to hang polemical statements around director Cho Sung-Hyung's gentle film. I have a lot of respect for her sensitive interviews of DPRK citizens, which go a long way toward demystifying a misunderstood populace. Extracting political observations from her decidedly humanistic film can't help feeling crude.

However, copious disinformation has been spread regarding the DPRK, so even a fair-minded film on that topic has a political orientation by necessity. While I'm not sure of Cho's own beliefs, her honest approach to the DPRK stands in stark contrast to something like UNDER THE SUN, a racist, misconceived work far more propagandistic than the nation it claims to be "exposing."

MY BROTHERS AND SISTERS IN THE NORTH is also concerned with the inner lives of DPRK citizens, yet Cho opts to listen rather than editorialize. She meets with workers from schools, textile factories, and farming cooperatives to learn more about life in the DPRK. These workers all appear happy to describe their working conditions, as well as what motivates them to work such long hours.

In honoring the wishes of Respected Leader Kim Jong Un and constructing a 'strong state,' they are able to lead lives free from the threats of imperialism and economic deprivation. Self-sufficiency helps to combat the cost of international sanctions, though several workers express hope that the sanctions will someday end.

Here I began thinking about life under capitalism, the neurotic misery that afflicts capitalist subjects. Long hours, low wages, dwindling notions of public benefit...as a US American, work has only ever felt like an unwanted obligation to me. Resultantly, I've developed a grudging relationship toward it, resenting its presence in my life and seeking to maximize my own leisure time in protest. Denied the possibility of self-determination through labor, I overestimate the importance of "free time," as this seems the only domain in my life where I can live as I please.

Watching Cho's film, I was moved by the workers' devotion to each other, their state, and their society. The usefulness of their labor is both evident and visible to them, which appears to impart feelings of deep satisfaction. Even life in the DPRK countryside is well-supported by its political establishment (via solar power and food rations). Whereas many Westerners hate their governments and wish for radical change, the DPRK's citizens are relatively content with a modest, self-sustaining socialism.

Several caveats: I don't want to gloss over the long workweeks, which are comparable to those in capitalist countries. The DPRK has gone through at least one major famine in recent times, i.e.: when subsidization from the newly-collapsed USSR vanished, disrupting domestic food supply. Life has been hard for the citizens of the DPRK in multiple ways, and living under threat of nuclear annihilation is just the largest of those worries. So I hope this all doesn't read as romanticism of a nation whose workings remain largely obscure to me.

However, when criticisms are made of the North Korean leadership, they often include lamentations for the abject suffering of DPRK residents. It is assumed that, as the indisputable worst nation on Earth, the DPRK must be tormenting its brainwashed hostages as well. Can happiness even be thought, much less felt, under savage totalitarian dictatorship?

To be sure, there is much work to be done in constructing an accurate historical record of North Korean politics. I have no doubt that, like all governments worldwide, the DPRK has produced widespread suffering through its missteps and failures. Taken on the merits, that prior assertion has a usefully anarchistic critique of governments disconnected from the needs of their people. But does it not apply moreso to nations that cause harm outside their borders? Aren't imperialist nations far more culpable than anti-imperialist ones? In rightful criticism of the state, asymmetries of power must be considered too.

I offer this rebuttal not as whataboutism, but rather as a good faith concession to skeptics of the DPRK cause. It is possible to respect the wishes and aspirations of North Korean citizens regardless of one's feelings toward the DPRK itself. To deny their subjecthood is just chauvinism with a superficially principled veneer, no matter how "left" the gesture.

I plan to continue deconstructing imperialist propaganda, much of which I suspect is racist falsehood. But there's no telling just yet where that process will lead me. In the meantime, I'm grateful for Cho's document of North Korean life, unassuming in form but truly daring in its sympathies.