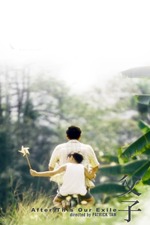 Wow, I sure would’ve gotten to this sooner if someone had told me it was a sensual but serious-minded film about desire, intimacy, and trauma set in Malaysia. Like recent rewatch MYSTERIOUS SKIN it’s a painful but special work, and it being my first by Tam feels like a very sensitive, considerate welcome from him.

Still, AFTER THIS OUR EXILE ranks among the more harrowing watches I’ve had in a long time. It mirrors Araki’s film by jumping out of the frying pan and into the fire with minimal time to adjust. During early passages, Boy, Tam’s protagonist, appears to us at an age where he’s just old enough not only to be terrorized, but influenced now too. After the symbolic snuffing of a candle’s flame, we witness Hsing — father of Boy — meet a new girlfriend, leaving Boy to fend for himself after his mother, Lin, had previously left Boy’s abusive father. Tam poignantly inserts a short shot of Boy looking at the missing ad Hsing had placed for Lin, a phantom image both to us and to frightened, lonely Boy. The crushing closeup on Boy that soon follows is our signal that it’s he who will really feel the pain of his father’s faults, and who will therefore be our focal point.

Boy and Lin being undocumented immigrants factors majorly in Tam’s dramatic structure; in contemporaneous Malaysia, there’s simply no recourse for Lin to get Boy away from Hsing. As adults we understand her dilemma, but as a child Boy doesn’t. The most crucial moment may perhaps be the melodramatic one where Lin reveals her pregnancy right after an emotional reunion with Boy. Feeling freshly abandoned, Boy rejects his place in her new life — in essence, consciously rather than unconsciously choosing the path of his father — and returns home to Hsing, where he is humiliated, hurt, and finally abandoned, this time by his other parent, the one whose security he’d sought after the loss of his mother.

Tam is unflinching about the impact this chaos has on Boy, and he wrings deep pain out of such intricate-scene-building: take, for example, Boy first begging his Aunt Jennifer for money, then the bungling the piggy bank heist, finally returning for a late night retrieval of the dropped loot. We are always having scenarios contrived for us by Tam to understand the whiplash of Boy’s life with Hsing; another notably melodramatic one sees Boy break down in tears while secretly observing a family and their terminally ill son, treasuring their abundant love and mourning its absence in his life.

Each humiliation adds up, to the point that Boy can hardly do anything with his feelings anymore but shut them down pre-emptively in Hsing’s presence. A moment of stolen happiness between them, seemingly taking place in the eye of their stormy relationship, rages back into violence and terror at the trial-by-fire ordeal of Hsing forcing Boy to exploit an unexpected blackout. But Boy is caught and attacked by the man whose home he enters, inducing Hsing to flee once the neighbors start gathering. For all the pain, misery, and frustration Hsing has caused Boy in the time we’ve known them, it is this betrayal which hurts him more primally than can be said through words, the one which spurs him into biting Hsing’s ear, an act of hatred so impassioned it may as well belong to a horror film.

By the time dramatic emphasis shifts to Hsing, we’ve come to know his self-loathing deeply and intimately. The film’s forward motion has been a true grinding away into nothingness of this man after all we’ve seen him put his loved ones through. Once Tam cuts to Boy as an adult, bereft of Hsing, there’s little left to see, say, or hear. We’re in the present, wondering now how he could live through it all and be expected to survive. While Tam hints at recovery and penance, the real work for Boy is most likely yet to begin, as it will involve coming to terms with who his father is, who he was, who Boy was, and who Boy has become, father and son now apart at last.