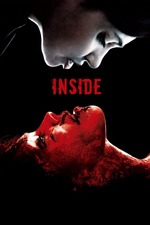 I hate this movie.

Despite that I come back to this every couple years, thinking "it can't be as horrific as I remember". "I know what's going to happen already, what's the big deal" and I'm always so wrong. This is such a depressing watch, Every. Single. Time. As soon as the scissors touch the belly button, my feet start tapping, and I start fidgeting and squirming, looking for a distraction. This movie is five stars because even after so many years, it still gets a real emotional response out of me. Sure, that response is mostly disgust and horror, but it's something. Most horror films, I can't say that.

Inside goes from 0-60 in no time flat. It slowly builds in the beginning, with a depressing car crash, leading to the loss of Sarah's (Alysson Paradis) husband, and unknown losses in the next car over (soon to be discovered). Which of course all comes into play throughout as the running theme of the film, but it makes for a real somber opening. The story builds in a believable way, making all the harshness to come that much harder. And this still might be one of the harshest movies I've seen.

Sure, other movies have had more blood, guts, and gore, but the violence is a little more lighthearted in most horror flicks. The story being told here makes the ensuing trainwreck feel so much more gruesome. It's just so... real. It's vicious, bloody and unrelenting. If knitting needle tracheotomies and scissorific c-sections don't make you squirm, nothing will! There are just too many horrifying examples to list, the violence never lets up. And just to twist the screws even more, the movie ends on a soul shattering finale, not to be forgotten. And I've tried. Oh, how I've tried.

I hate this movie...