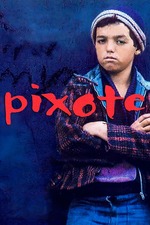 this boy was real,
his being was used to display the cruel conditioning processes inflicted upon the street children of Brazil which he was a part of

"Ramos da Silva's mother and teen-age wife, however, called the shooting a police execution--not an unusual occurence in Brazilian slums."

i wish this kind of tragic irony didn't exist...
there's no room for hope
and we call this true art, "gritty realism"