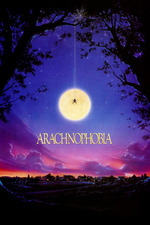 I'm not really afraid of animals or bugs.

When I was a kid I went chasing after snakes and yanked big fat worms out of the ground. I boldly swatted wasps and bees away and brushed off big scary bugs that would occasionally land in my lap. This mostly carried over into my adult life. And it carried over with spiders too.

But there are just times where seeing a spider doesn't really sit right with me. There is something psychologically terrifying about seeing a spider silently glide across your floor right before you go to bed...

Despite my bravery with strange creatures, there is still something that gets me about a spider crawling across bare skin and slinking around under your covers. It's those little moments that make Arachnophobia an extremely fun and tingly thriller.

I'm always confused when I see this movie get bashed or when I see that it has low ratings. It's a very effective and atmospheric little flick that is very good at what it intended to do. It's an earthy and down home monster movie with empathetic and genuine heroes with a grand sense of community. It plays out like an old B movie. An unknown force is violently removed from its natural world and placed in a small town filled with apple pie nostalgic feelings and friendly faces. In other movies this unknown force would be an alien or scientific experiment breaking loose, but here it is simply a spider. A big, fat and ugly spider; but still a spider. It's a Venezuelan spider whose big attitude and potent venom can drop a man in a matter of seconds. And when the spider becomes an unexpected stowaway on a flight back to the U.S, a small California town will pay the price. The fat spider mates with local house spiders (shown via a very brief and steamy spider love scene) and soon its offspring are wreaking havoc on the community.

The introduction of the spider and how the community deals with the problem is very reminiscent of Jaws. Here we have a flawed hero who is being put on the spot and forced to defend the small town. The hero is Jeff Daniels; a goofy and humble family man who becomes stressed as his battle with the spiders carries over to his life. It also doesn't help that he is the new town doctor and his new patients seem to be keeling over.

Jaws, troubled family man defending a community, natural forces, mysterious score and earthy down home vibes? Sound like a Steven Spielberg film? Well, he produced it so his greasy fingerprints are present throughout. It feels very much like the classic Spielberg creature feature but it is restrained to a very small scale and takes itself a little less seriously than a real Spielberg movie would have. Spiders that jump on you from the ceiling? Spiders that still attack you despite being set on fire? Spiders that chase people? It's all very silly. But the most fun kind of silly. It's the same reason we are able to overlook why the giant green anaconda in Anaconda was able to eat one full grown man a day. Snakes take weeks to digest food. But why do we care? Because it just ate Owen Wilson and it was fun to watch. That's why.

Arachnophobia is a fun little flick with lots of laughs, lots of heart, lots of cheese and lots of moments that make your skin feel tickly and make you wanna ruffle out your clothes.

Also John Goodman as the exterminator is worth the price of admission alone.