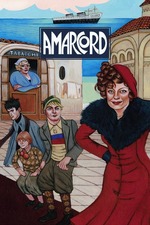 Saint Louis cries when you touch yourself.

Never have I seen a childhood nostalgia film be so brutally honest when it comes to the real life places and people that the story is inspired from. Amarcord comes from the mind and memories of the great Federico Fellini's carnivalesque and alien brain. This film is supposed to be a very personal and achingly nostalgic portrait of the directors youth in a small 1930's seaside village and Italy, and while I didn't grow up in Italy, nor was I born anywhere near 1930, I can tell you that no matter where you are from or how you got to where you are now, Amarcord will feel like home.

However, Amarcord won't feel like home at first but will instead start to sink over time. Its not a traditional "coming of age" or childhood film like you would expect but rather a hazy and dreamy look at the fractured memories and larger than life characters that dominate our reminiscent subconscious. I read through the booklet that came in the Criterion BluRay set and there was a particular essay by Fellini himself that vaguely outlined the draw to make this film and offered almost an explanation or new outlook to view this film with. Sometime in 1967 Fellini was hospitalized with what he thought at the time to be a terminal illness. His words were strange, his thoughts abstract and the story seemed to be broken. As he lay bedridden, drifting in and out of consciousness his thoughts naturally turned to his boyhood. Coming out of the traumatic experience he had an idea for a film in his head that would be a return to his hometown Rimini, Italy, in obvious grandiose Felliniesque fashion. So how does this experience change how I saw the film?

Amarcord doesn't follow any real plot or driving force. There isn't really a plot so to speak and it doesn't follow a specific set of characters. Its almost like a fever dream or an old man laying on his deathbed regaling you with vague tales of an age long dead. The film is made up of dozens upon dozens of small little vignettes and scenes that range from beautiful, tranquil, rambunctious, sexy, nonsensical, heartbreaking, and just plain fun. Its like a bunch of quirky little stories and the narrative kind of just drifts in and out of different characters daily lives, their families and various places around town. You COULD say that Titta's family is the central focus but the film lingers around and jumps to different perspectives so I prefer to look at it as a large canvas and cornucopia of crazy characters who inhabit a bustling and living world of old Italian cobblestone streets and salty music filled air. Fellini really captured the time, the place and memories pretty damn flawlessly. Its colorful, exuberant, elegant, but also childlike, crude and at times an almost juvenile level of eroticism. Like I said, its incredibly honest and Fellini wasnt afraid to expose himself for the sexual little deviant he was. Of course, the name of the village, and the name of all the characters were changed and the place and people are largely exaggerated, so its hard to say "that character was Fellini, or THAT character was Fellini." They were all Fellini. Everything here was Fellini and only Fellini. None of the dialogue seems real but instead appears as an aching, longing call out from the past. Its like a man trying his hardest to remember his past but names are wrong, events are probably a lot crazier than they actually were, and characters are projections of old feelings, love and hurt. Its all scored by classic compositions that make everything feel like theatric production of your own mind. Like Fellini's subconscious manifesting itself of film. I was afraid of what that might look like, but I was very impressed.

Amarcord is a film that I'm sure Fellini watched with wet eyes, and a triumphant feeling in his heart. He probably sat in the directors chair with an immense sense of pride in himself. He was probably saying things to himself like "I remember when my uncle did that." Or "I remember those summers in the village." He didn't want to return to his actual hometown but instead created a new one where he could relive old memories and new. It was very ballsy and one could almost say baffling that he expected us to join in on the nostalgia and reminiscing of a very specific life. A life we didn't live. But he makes it so appealing and so unique that it is VERY hard to put down or shake.

Amarcord is not only Fellini's hometown, but ours. These are not his memories but everyones. It makes us feel old and young. Big and small. A seminal experience unlike I have ever seen. As soon as it was over I had the urge to start it over again.

That may or may not have had something to do with the incredibly busty Italian women.... Maybe that's why Fellini found himself so "attracted" to his hometown...