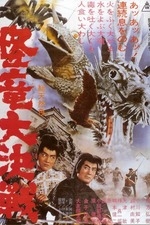 YES! I loved this! The Magic Serpent, or The Mystic Dragons' Decisive Battle (way better title), is a tasty mixed grill of 60s Japanese cinema. At its core, it's a tale of revenge. Mix in magic-fueled martial arts and a handful of kaiju and you've got yourself something fabulously out of control.

Awesome things that happened in The Magic Serpent:
- The hero is decapitated early on and his composited head flies about having a great time.
- A giant dragon receives a blood-gushing head wound.
- There's a battle between said giant dragon and a giant horned toad and a giant spider that shoots spider-jizz everywhere.
- Some ninjas hypnotise the hero briefly using wall partitions.
- The film's (pretty outrageous) villain rides a mass of lighting (I think) to a battle... it takes him ages to get there.
- We open and close with a super sweet song that I believe it singing about the "decisive battle" of monsters.
- That dragon and horned toad I mentioned? THAT'S THE FILM'S HERO AND VILLAIN IN MONSTER FORM! The jizz-spider? THAT'S THE LOVE INTEREST. Fuck.

This movie is great. Watch it subbed, not dubbed.