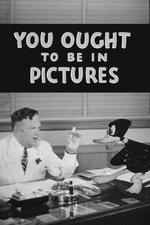 Move over Roger Rabbit, Porky Pig was stepping off the page and getting into real-world hijinks decades before 'Who Framed Roger Rabbit'.

It has been fascinating scrolling through all the early seasons of Looney Tunes, and noticing that Porky was their main character before the focus seemed to move over to Bugs around the 7th season. In this cartoon Daffy wants to take over Porky's stardom, so he talks him into quitting and instead attempt to break his way into features.

The effects of combining the animated characters with people was a little rough around the edges, but looks much better than I thought it would for the 40's. Heck, I am surprised they even thought of doing this concept so early on. But Porky's time away is short-lived when he has disastrous results from just rolling into a studio and assuming he would instantly be hired for being the one and only Porky Pig.

Thanks for reading!
"That's all Folks!"