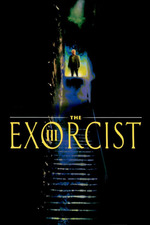 you could do a whole room 237 frame-by-frame on this, one of the true hideous, unrepeatable achievements of studio horror. if yr ears perked up last nite hearing joebob toss out that blatty was "in the psychological warfare" division of the airforce, here's some info ive collected over the years:

The Catholic Archdiocese of Los Angeles helped to finance the film based upon the novel by Blatty, who claimed it was based upon an actual case. Eventually, Blatty himself was revealed to be a former CIA agent, a specialist in psychological warfare. And that is exactly what The Exorcist was. The psycho-terror was conducted through the use of subliminal, subaudial sounds in the soundtrack - the screams of slaughtered pigs, the buzzing of angry bees - and subvisual images in the movie frames - the pace of the priest Father Karras as a grotesque death mask - presented at sound and speed levels too low and too fast for the ear and eye to consciously absorb.

Even after it was revealed that subliminal techniques were used liberally in the movie, many people (such as director William Friedkin) saw it as merely a case of enhancing the narrative with special effects, art often being cited as the one field where the end justifies the means. I maintain they were used for a more sinister function. The Exorcist was not merely another horror movie. It skirted on the edge of theology and metaphysics. It tapped sources of fear and dread that were rooted deep in the psyches of its audience.

Friedkin has claimed that subliminal messages are both “a very effective storytelling device. The subliminal editing in The Exorcist was done for dramatic effect — to create, achieve, and sustain a kind of dreamlike state” and that “there are no subliminal images. If you can see it, it’s not subliminal.”

The music is another crucial element of the film. While Mike Oldfield’s Tubular Bells (actually part one of the overall record) is considered the theme for the movie, it was a complete accident that it was picked. Originally, Lalo Schifrin created six minutes of music for the trailer that were considered too frightening when combined with the images of the film. Some claim that this music was reused for The Amityville Horror, but the truth is that Friedkin hated the music that while it was being recorded, he made the orchestra stop playing and threw the tapes away in the studio parking lot — in front Schifrin and his wife. Additionally, the director claims that he wishes that had he heard them sooner, he would have used Tangerine Dream for the film (they would score his film Sorcerer).

In the previous installment we looked at the Exorcist phenomenon, and the extraordinary reactions to the film during its initial theatrical release. This is no small thing- it was a major news story at the time and papers and reports have since been written studying the film and its effects.

What many academics may overlook is William Peter Blatty's work as a Psychological Warfare expert for the military, and his subsequent work as a propagandist for the USIA.

Remember that the film was released during a very troubled time; the US was losing the war in Southeast Asia (which had spread to Cambodia and Laos), wars between Israel and its neighbors triggered an oil price war that caused major gasoline shortages in the US, the country was on the verge of a constitutional crisis as a result of the Watergate scandal and the peace and love vibes of the Sixties had darkened considerably as the drugs got cheaper and nastier. Many planners in the Pentagon felt the question of a hot war with Russia or China was a question of when, not if. Given the fact that far worse human experimentation took place in far more placid times, it's not hard to conceive of a blockbuster film being used to roadtest some of the latest silent weapons for quiet wars.

The range of effects that The Exorcist seemed to produce in its initial run sound very much like the result of sonic weaponry, in this case the use of infrasound. From an article entitled 'The psychoacoustic effect of infrasonic, sonic and ultrasonic frequencies within non-lethal military warfare techniques':

"Throughout the 20th and 21st century, there has been a vast amount of research collected and interest gained in the use of non-lethal weapons (NLW), which are intended to immobilize or impair targets without causing permanent or severe damage to the human body.
As technologies have developed, it’s apparent that military bodies within the world seek to create weapons resulting in “war’s without death”" (Scott & Monitor, 2010).

And the effects of these weapons seem to sync up quite nicely with the symptoms many viewers of The Exorcist complained of during its first release:

"Exposure to levels above 80db between 0.5Hz and 10Hz causing these possible vibrational movements within the ear’s functions, are said to cause psychological changes such as fear, sorrow, depression, anxiety, nausea, chest pressure and hallucinations" (ECRIP, 2008).

It is the result of this effect in the middle ear, that (Goodman, 2010 p. 18) cites as being discovered by military personnel during World War 1 and World War 2.

Given the fact that The Exorcist was released in 1973, we have a smoking gun on the field testing of psychoacoustic weapons- and their intended emotional and psychological effects- that very same year.

"The effect of emotional and psychological change as a result of infrasonic exposure can later be found during the second Indochina war. In 1973, The United States deployed the Urban Funk Campaign, a psychoacoustic attack during the war with the intention of altering mental states of their enemies" (Goodman, 2010).

"The device utilised both infrasonic and ultrasonic frequencies, which emitted high decibel oscillations from a mounted helicopter onto the Vietnamese ground troops" (Toffler, Alvin, & Toffler, 1995).

from "CIA psychological warfare operations: how the CIA manipulates the media in nicaragua, chile & jamaica" by fred landis (in SCIENCE FOR THE PEOPLE issue 14, jan/feb 1982):

The intense psychological and physical fear aroused in viewers of the film The Exorcist is notorious. Not as well known is the fact that these reactions were the result of the use of very strong subliminal messages, in particular of a death mask. The subliminal use of the death mask in The Exorcist has been widely discussed in many publications. It should be noted that William Peter Blatty, the author, was involved in psychological warfare operations in Viet Nam. As described in Media Sexploitation, by Wilson Brian Keys, The Exorcist was a brilliant repertoire of visual and auditory subliminal innovations There is no possibility of rational decision making or defense, since consciousness is bypassed completely.

Numerous times during the movie there was a flash of light and the face of Father Karras momentarily appeared as a large, full-screen death mask apparition. At the movie's climax, when Father Karras was possessed by the devil, his face turned white-closely resembling the tachistoscoped death mask.

During the 1980 Jamaican elections heavily retouched photos of Prime Minister Michael Manley looking like a death mask appeared in the Daily Gleaner. (Other examples can found in Psychological Warfare in the Media: The Case of Jamaica.)

What it feels like to be in a country like Chile or Jamaica during a period of intense psychological warfare is as if one were actually in The Exorcist instead of just watching it. Compare the above audience reactions with the following descriptions by visitors to Chile:

Baeza Flores, writing in Radiografia Politica de Chile: "I arrived like a traveller feeling a bit dizzy from the gas of propaganda and counter-propaganda of psychological warfare, a little seasick from the ideological gas. "

Oscar Waiss, writing in a Nacion: "The purpose of the CIA is to create a national psychosis, including an insane repetition of themes, which could serve as background music for a horror film."

"Blatty’s self-directed 1980 film THE NINTH CONFIGURATION was intended as a nominal sequel, with its schizophrenic astronaut protagonist supposedly the very one THE EXORCIST'S demonically possessed Regan predicted would “die up there.”"

--the boy (ronald hunkeler aka "ronnie mannheim") whose exorcism was the basis for the novel, ended up working at NASA for decades: "Ronald went on to work at NASA in Greenbelt, Maryland where he retired in 2000. A July 27, 1964 article with his picture appeared in NASA’s Goddard Space Center newsletter under a profile of “Ronnie”."