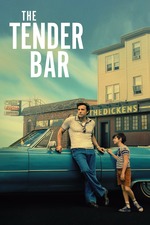 In spite of the fact I kinda hate George Clooney's wry and wholesome humor, and I can literally hear his voice throughout this movie giving me an elevator pitch "that a boy needs a father figure, even if it's not his father", enough aspects of The Tender Bar won me over, though some took a little time to get used to.

The voice-over narration and time jumps are a little pandering and meandering, yet he eases in and loses the VO while playing with the two timelines by having them meet, through a dream, and keeps the thematic narration of the two timelines connected. Also idk what is up with the camerawork in here, with his quick zooms, but it kind of reminded me of some of the Korean directors I love so much. Like Hong Sangsoo. I have no idea at all if Clooney was influenced by that, but giving it the benefit of the doubt, I grew to love it.

Affleck is fantastic in here. He keeps his rugged Boston charm, though trades it in for a Long Island charm, while playing a real person with tenderness and struggles. One of the best performances from him.

This may be my favorite Clooney-directed film in years, though that's not really saying much. It hit me in the feels, even though I'm being really nice to some of the clunkiness.