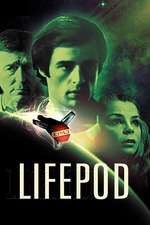 It's the future and a luxury starship is on the way to Jupiter. After an accident some passengers are ejected in an escape capsule and the ships captain stays onboard to argue with a computer built into the ceiling.

I'm a sucker for cheap early 80s SF and this ticks all the boxes. I love the groovy synth score and overall aesthetic. The passenger starship is oddly shaped, like a giant shiny dustbuster. The miniature work is all shot in camera, I've certainly seen worse.

There are the bones of a good idea in here, being killed off by lack of budget, terrible direction and general ineptitude. The handful of actors aren't great, the roles aren't too demanding either.

Allan Sandler and Robert Emmeneger are listed in the opening credits but not in the Letterboxd listing. It has reused props and sets from their other Sci Fi "epics".

It's almost good, and almost so bad it's good. Right in the creamy, mediocre middle.