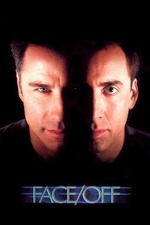 Ludicrous, over the top and hilarious. I've somehow managed to miss this until tonight.

Edited to within an inch of its life with insane action scenes, this could be the epitome of 90s action.

Any non action scene was a bit clunky, Cage and Travolta seem to be in an acting contest of some sort. I'm still not sold on either of these guys.