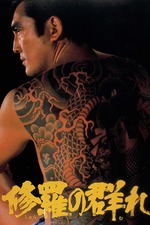 The Story of a Man Among Men

Without knowing too much about 80s yakuza films, this feels very much like a throwback to me. Besides the fact that it’s set in the 40s-50s, it’s just clearly a post-jitsuroku era ninkyo eiga.

Hiroki Matsukata is a very chivalrous man who joins the yakuza under honorable circumstances and is constantly illustrating good behavior, be it calling out anti-Korean racism, or successfully uniting several gangs with minimal bloodshed. Like a typical ninkyo hero, all those around him respect his actions and are frequently talking about how great he is. That said, this was made after the yakuza film revolution of the 70s, so it’s more violent and bloody than your classic Ken Takakura flick.

He’s joined by a real murderers’ row of Toei yakuza heavy hitters, with roles ranging from cameo to costar. They’re all experienced and bring that to their performances. The music also calls back the Toei films that came before it, many tracks feeling like they were pulled out of a vault, but occasionally getting a little modern synth thrown on top.

A lot happens in this film, sometimes accompanied by a BATTLES WITHOUT HONOR-style narrator, and especially in the last half hour or so things really speed up. There’s some drama presented about the effect of Matsukata’s life as a yakuza on his children which didn’t really work for me because they got kind of lost amongst all the other moving parts of the film.

However, there are several really great emotional kicks. I found a funeral scene, where we get a shocking glimpse of one of Matsukata’s friends after being incinerated, actually very moving. Each of the high ranking gangsters have to put some of his ashes in the urn, and to see how they each go about it was effective. Also, there’s a great scene between Matsukata and Bunta Sugawara towards the end of the film that I really loved. The evening beach setting, and roaring dramatic Toei score just hit right.

In a final shocking move, unlike ninkyo or jitsuroku eiga, the ending does not come with a flash of violence! This really took me by surprise, and I appreciated the deviation from the well worn formula.

Patience Has An End