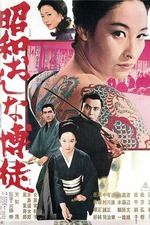 A tragic chivalrous yakuza revenge tale, told in its first hour through a tragic flashback, then zooming back around to the present. That’s when the revenge happens.

After some personal tragedy, Kyoko Enami falls in love with Hiroki Matsukata, the heir to the head of a local gang. She gets a tattoo and is all ready to be a yakuza wife when Matsukata’s brother, manipulated by the ultimate big bad, kills him in an attempt to take the throne. A year later, Enami has become a gambler and moves through the underworld to find those involved with her husband’s murder.

Enami and Matsukata are good, but it’s Shigeru Amachi as the honorable yakuza who is ordered to kill Matsukata and later allies with Enami who really stands out to me. He was great, and his story was interesting. Tatsuo Endo also caught my attention. He’s usually a big bad boss himself, but this time is in the lovable lackey role.

This was good. In some ways a by-the-numbers ninkyo film, but I thought it was more complex than a standard entry in the genre. And yet not overly convoluted to the point of incoherent, which also happens sometimes. A good balance. Great direction from Tai Kato. Great cinematography and score. There’s a pretty layered set with a lot of depth in Matsukata’s death scene, with the smoke of a passing train in the far background, which I thought was really impressive.