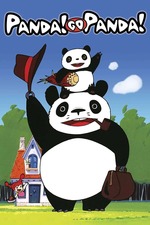 First, a parenting pro-tip: If you leave your five year old orphaned granddaughter home alone and she writes you that she now has a daddy and is having a baby, get on that train back home ASAP. Chances are it's not a friendly talking panda that's adopted her. Grandpa's memorial can wait. You want to get back and do something about it before she sends the third letter about how her new daddy buys her presents.

Now seriously. Panda! Go Panda! is an extremely charming little film. It combines some of the best qualities of both its writer Hayao Miyazaki (Famous for directing classics like Princess Mononoke, My Neighbor Totoro and Spirited Away, as well as the underrated Porco Rosso among many others) and its director Isao Takahata (who co-founded Ghibli with Miyazaki and directed great films like Grave of the Fireflies, Only Yesterday and The Tale of the Princess Kaguya). Panda! Go Panda!'s script is overflowing with Miyazaki's childish joy and imagination, and demonstrates his penchant for writing instantly likeable characters. The main trio Mimiko, Papanda and Panchan are all immediately and fiercely endearing, though Panchan falls a bit behind the other two, and the film moves at a brisk pace through its 35 minute run time, putting its characters in a surprising amount of fun shenanigan-ridden situations. I also adore the way Papanda is portrayed as kind of a fat, lazy piece of shit for most of the film, as it gave me a character to relate to (and he's funny as all hell).

The direction is less flashy, as the film looks pretty standard for a 70s children's anime, at least at a first glance. However, I was actually very often surprised at how legitimately appealing it looks at times. Everything has the bright, colorful palette standard for the era, and has what were fairly standard character designs for the time, but shots are often very cleverly constructed, resulting in a fun bouncy feeling to the entire thing. The animation on every character is also just a whole lot of fun to watch, particularly Mimiko, whose exaggerated, energetic and clumsy motions really sell her as an actual child, and cause the sole act of watching her move around to become entertaining.

I've heard here and there that Panda! Go Panda! was meant to be a test run for My Neighbor Totoro, and, whilst I sort of doubt it (the films are 16 years and one Panda! sequel appart, after all) I can definitely see some aspects of Totoro in Panda!. Totoro is certainly more of a film. There's more to unpack thematically, it's considerably more imaginative (Panda! Go Panda! feels completely cookie-cutter in comparison), and the characters are all more fleshed out. However, Panda! Go Panda! feels like the misty afterimage of Totoro, the image of it you're left with in your mind after not seeing it for a bit. It's a hell of a lot of fun, and one of the ultimate children's films. I'm very excited to watch the second Panda! Go Panda! film.