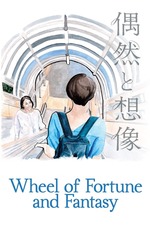 Wheel of Fortune and Fantasy is an anthology film, a collection of three novellas revolving around the theme of coincidence and, for the lack of a better term, imagination. The film’s style alludes to that of Hong Sang-soo, but in a less formalistic and more reinvigorated aesthetics (the abrupt camera zooms are the highlights of the narrative, and much less pretentious than Hong’s). There’re witty charms and whimsical plot twists that often recontextualize the preceding scenes in an exquisitely dramatic tone, it keeps me fully engaged for its two-hour running time in an unexpectedly rewarding way. The three episodes are individually distinctive in its own terms. The fortuitous love triangle in the first episode has a brief demonstration of a demented romance, the fantasy part comes as a possible outcome from a character’s split-second decision, surprisingly it ends with a bittersweetness. The second episode is a male’s revenge plot turning into a seduction game, the centerpiece is highly erotic but entirely performed verbally, or else through the characters’ subtle body language. It’s a sexual fantasy that goes horribly and hilariously ‘wrong’ at the end. The last episode is about a haphazard reencounter between two schoolmates after 20 years, the awkward revelation halfway through is rendered into a heartwarming game of roleplaying. It’s also the one that’s tangentially a Sci-Fi film with its premise established upon an outbreak of Internet virus. The three episodes are spatially restricted to several locations, whilst narratively dominated by conversations. The playful mise-en-scene injects a sense of spontaneity that juxtaposes the themes of randomness and liberty: the fortune is controlled by fate, whilst the fantasy is conjured by free-will. One way or another, it’s the countless possibilities in human interactions that have fascinated both the filmmakers and the audience, Wheel of Fortune and Fantasy gathers the most engrossing ones and let them spin.