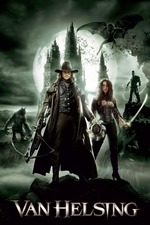 If I was a film critic with a reputation to uphold, I wouldn’t go anywhere near Van Helsing (2004), let alone praise it. Luckily, I have very little to lose in my defense of this ridiculous film, and because it was the first result when I typed “Dracula” into Netflix, it has the honor of being first in line in my odyssey through the Dracula Cinematic Universe (DCU).

I once watched an interview with Willem Dafoe where he praises the idea of a historical film that “doesn’t point at itself," a turn of phrase that I instantly loved. And a task that few films accomplish. How often can we say we have watched a period piece that completely immerses us in its setting -- that brings us in to a new and unfamiliar world a way that feels completely natural?

Certainly not while watching Van Helsing (2004). Every part of it is garish and artificial, generally to the point of extreme corniness. This is entirely by design and certainly the greatest strength of the film.

I won't go into great detail regarding the many ways corniness manifests itself in Van Helsing -- if you care to know more, reviewers before me have taken great pains to eviscerate almost every aspect of this film, from the CGI effects (overused and goofy) to the costumes (hot topic-esque) to the fake slavic accents (if I was Romanian I'd certainly be offended). What's really important to understand about Van Helsing, though, is that its corniness isn't a failing of its direction or production: it's a filmmaking device in its own right - and used to great effect.

It's no high art, but why should it have to be? Van Helsing has heart! It exhibits passion for the craft of storytelling and filmmaking. Shots are thoughtfully set up and some of the cinematography is genuinely beautiful, especially the black-and-white prologue. The sets, props, and costumes are wonderfully anachronistic, with detailed steampunk weapons, mall-goth corsets, leather trousers, and lots of mad science lab equipment. That all of these elements are presented with a certain gaudy flair - call it camp, call it kitsch, call it whatever you like - lends the film a sense of stylistic cohesion that keeps it from feeling dull and dutiful in the way high-budget low-plot films often risk. It’s corny, certainly, but in a way that’s entertaining in exactly the way you want a film about wolfmen fighting vampires to be.

Yes, Van Helsing points at itself - incessantly - but who could blame it? The actors are hamming it up, the fight scenes are frequent and filled with gruesome monsters that are fun to watch get kicked apart, and the dialogue hits exactly the right humorous notes to give the film a certain self-aware irony. It’s not a good film in the way that the pulpy slasher flicks to which it’s paying tribute aren’t good: because they were never supposed to be. But it’s fun, and that’s what’s so great about it! At least three windows are dramatically jumped through! A cow gets thrown through a barn by a flying vampire woman! The actor who plays Faramir in Lord of the Rings is a wacky friar named Carl! Hugh Jackman has a cool silver-bullet machine gun! Kate Beckinsale is really hot! Frankenstein’s monster is genuinely endearing! I could go on!!

This movie is campy and ridiculous in the best way, and the camp is tied together beautifully by Richard Roxburgh’s stellar portrayal of our main villain, the classic movie baddie Count Dracula. While some reviewers and critics have been baffled at his weird, somewhat fruity take on the Count, in my opinion his performance is so endearing that you almost want to stop ridiculing his goth Sarah Palin hairstyle and goth military surplus store wardrobe. He exudes sleaze and arrogance in a way that feels like a perfectly natural interpretation of character, and I can’t help but wonder if in the hands of a better director Roxburgh’s Dracula wouldn’t have gotten more praise.

Is Van Helsing a good film? No. Did I enjoy it? Yes. Should you sit down and watch it right now? Probably not. But it grinds my gears to see people throwing this film under the bus when, for all its flaws, it’s generally great fun and feels like it was made with care. As I continue my sojourn through on-screen Dracula depictions, this is one that will stay close to my heart.